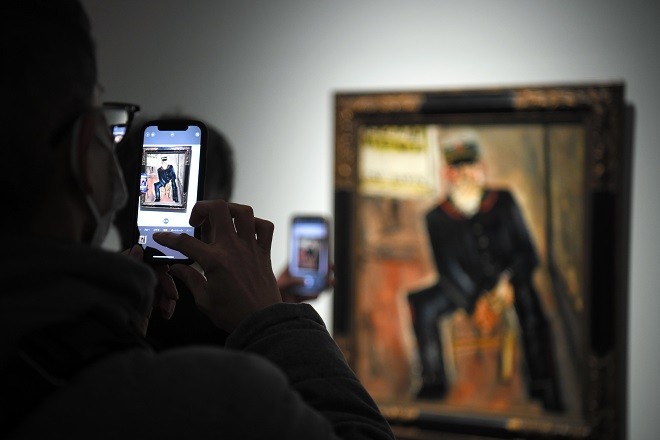 OSAKA—After 40 years in the making, the Osaka Nakanoshima Museum of Art opened in the city’s Kita district on Feb. 2, featuring one of Japan’s largest collections.

Characterized by an exterior that resembles a jet-black box, the five-story museum stands alongside a river on the Nakanoshima sandbar.

To celebrate the opening, a special exhibition entitled “Hello! Super Collection” is currently held in exhibition halls on the fourth and fifth floors, which are among the largest in the Kansai region.

Exhibits include masterpieces by Modigliani, Dali, Magritte and other modern artists, works by Yuzo Saeki, Jiro Yoshihara and other artists associated with Osaka, as well as posters and furniture by national and strangers.

The Osaka city government in 1983 proposed a basic plan to build the modern art museum as part of a series of projects to celebrate the 100th anniversary of Osaka city status.

The city government set up an office to prepare for the project more than 30 years ago, and officials have since collected more than 6,000 works of art, including those donated to the museum.

The project encountered a number of difficulties.

The art collection budget was cut due to fiscal difficulties, and the project itself was sent back for consideration.

There were also plans to incorporate the new museum into the Osaka City Museum of Fine Arts in the Tennoji district.

“I was worried about what would happen to the collection, but I’m glad the museum managed to open,” said Atsuko Okuma, 64, who has lived in the city for about 30 years.