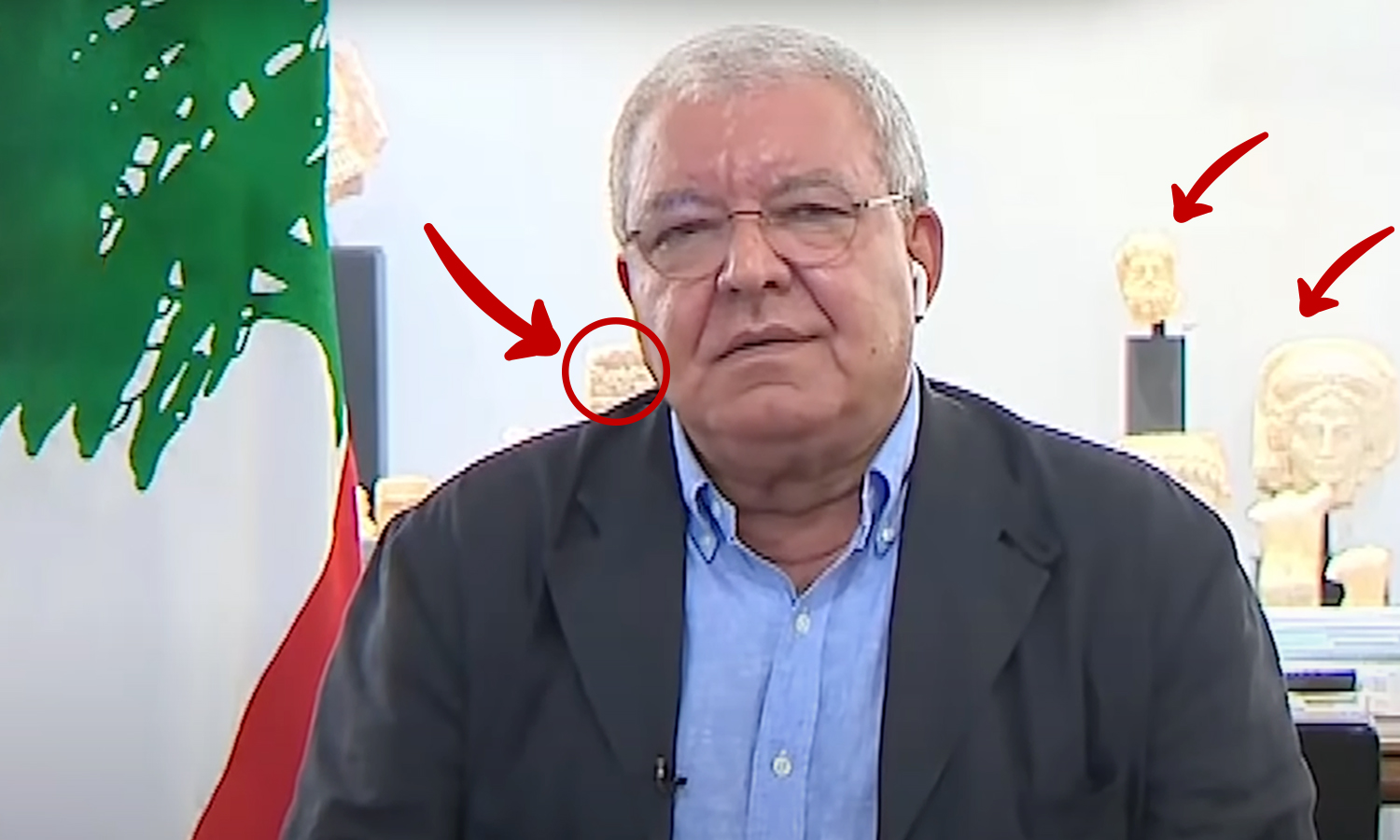 Antique thieves usually hide their stolen items; looted and tampered with objects, which have remained for thousands of years in archaeological sites, are generally secret from the black market. Antiques thieves avoid displaying them to the public, especially on television screens, for fear of legal reprisals. However, this is not the case for one of the Lebanese officials, who recently appeared in a TV interview with a number of real statues looted in the background in the Syrian city of Palmyra.

In a remote maintenance with al-Jadeed TV on October 11, Lebanese MP Nohad Machnouk appeared boastful with the background which contained antiques from the Syrian city of Palmyra.

Following the interview, which went viral on social media, many Syrians and Lebanese expressed their anger at the presence of illicit antiques in Machnouk’s office.

Machnouk Media Office commented that the archaeological objects were in the Machnouk media office, not at his home. â€œThey have been there for more than ten years, and they are registered with the Ministry of Culture according to standard laws, some of which prohibit their transport outside Lebanon, in order to protect them from trade. “

What pieces appeared behind Machnouk?

Saad Fansa, co-founder and board member of the El-Adiyat Association for the Protection of Antiquities in Damascus, said pieces on display behind Machnouk are looted in the city of Palmyra. These pieces are heads of statues from Palmyra, like the head of a small statue representing theatrical masks.

Fansa said Enab Baladi that these statues were stolen from the Palmyra Museum in 2014 and 2015, that is to say when Nohad Machnouk twice held the post of Lebanese Minister of the Interior. This contradicts Machnouk’s story that the statues he owned ten years ago and “are registered with the Ministry of Culture according to standard laws, some of which prohibit their transport out of Lebanon.”

Fansa believes Syria has been plundered by many countries, including Russia, Iran and Turkey, through their members on the ground. So-called Islamist factions, Syrian regime forces and their allies on the ground, including faith groups such as the Syrian National Defense Forces, have significantly contributed to the trafficking of antiques.

No documentation or liability

Syrian journalist and defender of Syrian antiquities, Omar al-Buniya, said Enab Baladi that the International Criminal Police (INTERPOL) asked the General Directorate of Antiquities and Museums of Syria (SDGAM) to provide them with the numbers and descriptions of the looted objects. However, SDGAM has said it does not have any records of antiquities and will reach out to foreign missions that have been working in Syria to secure artefact archive.

Al-Buniya pointed out that SDGAM is to blame for the loss of many historical artefacts in the country, not to mention the fact that the Syrian government itself used to smuggle archaeological artefacts. Moreover, he did not archive them on purpose so that they could be easily smuggled, according to al-Buniya.

The presence of artifacts looted from Syria in Lebanon is contrary to international law. However, the relevant Syrian government authorities are believed to play a critical role in demanding the return of works of art and cultural objects stolen in recent years by providing Interpol with archives full of necessary documents describing the looted artefacts.

An international committee should be formed by the United Nations Educational, Scientific and Cultural Organization (UNESCO) to hold Lebanese officials accountable, especially Machnouk.

Indeed, Lebanon has become a major market for the trafficking of antiques from Syria. Lebanese Hezbollah contributes to the looting and trade in illegal antiquities from Syria, especially with the proliferation of party militias in Maaloula, Palmyra and other former Syrian cities, which publicly excavate cultural artifacts in Syria.

Who facilitates the entry of looted antiquities into Lebanon?

Idlib City Museum Director Ayman al-Nabo said Enab Baladi that the sculptures of Palmyra have been stolen by many countries. The Directorate of Antiquities in Idlib only managed to recover seven sculptures from Palmyra, and now they are kept in the Idlib Museum.

According to al-Nabo, the illegal antiques trade did not stop even in peacetime in Syria, but it was carried out by legal and influential figures of the Syrian regime, such as Brigadier General Dhul-Himma Shalish. and Wafiq Nasser and personalities from the military and political security branches. It was not allowed to circulate or report these thefts because they were carried out by prominent people in the regime.

Al-Nabo pointed out that Hezbollah is taking control of the crossings between Lebanon and Syria, facilitating access to a lot of illegal trafficking in various areas, including Syrian antiquities.

Iranian militias collude with the Syrian regime in looting and trafficking in antiques.

Journalist Omar al-Buniyah previously said Enab Baladi that military intelligence manages smuggling operations. The Iranian militias are a vital partner of Maher al-Assad, the brother of the president of the Syrian regime, and officers of the â€œpresidential palaceâ€ with all that is underground in Syria.

In a investigation driven by Enab Baladi in the theft and looting of antiquities in Daraa on June 3, charges were brought against some Syrian regime officers for participating in illegal excavations and trade in cultural objects from Syrian archaeological sites.

Members of Air Force Intelligence and Hezbollah conduct archaeological excavations in the areas of al-Jaidour (the countryside northwest of Deraa), the countryside west of Daraa, the Yarmouk basin, which are known to be rich in historical vestiges.

Since the start of the revolt against al-Assad in 2011, many archaeological sites have suffered extensive damage due to the bombardments of the Syrian regime and its main ally Russia, or due to the fighting between the different parties, or for military and ideological reasons.

Several antiques have been looted to support fighting groups, such as militias allied with the Syrian regime and the Islamic State (IS) group. Thus, the illicit trade in antiques has recently flourished.

Thus, UNESCO, funded by the European Union, has launched many projects to protect Syrian heritage, which is constantly destroyed and stolen.

The most important project requires urgent action to protect Syrian antiquities by putting in place several practical mechanisms to preserve what remains of the antiquities. It aims to uncover what has been stolen or destroyed and to prosecute antiquities traffickers, holding them accountable under international law.

Prosecuting violators of these laws remains difficult given the mass corruption and suspicious transactions to the detriment of this legacy. In addition, access to these places is a challenge due to the complex security situation. There is also a dearth of information on how local lawyers and activists in Syria will apply the international legal mechanisms in question.