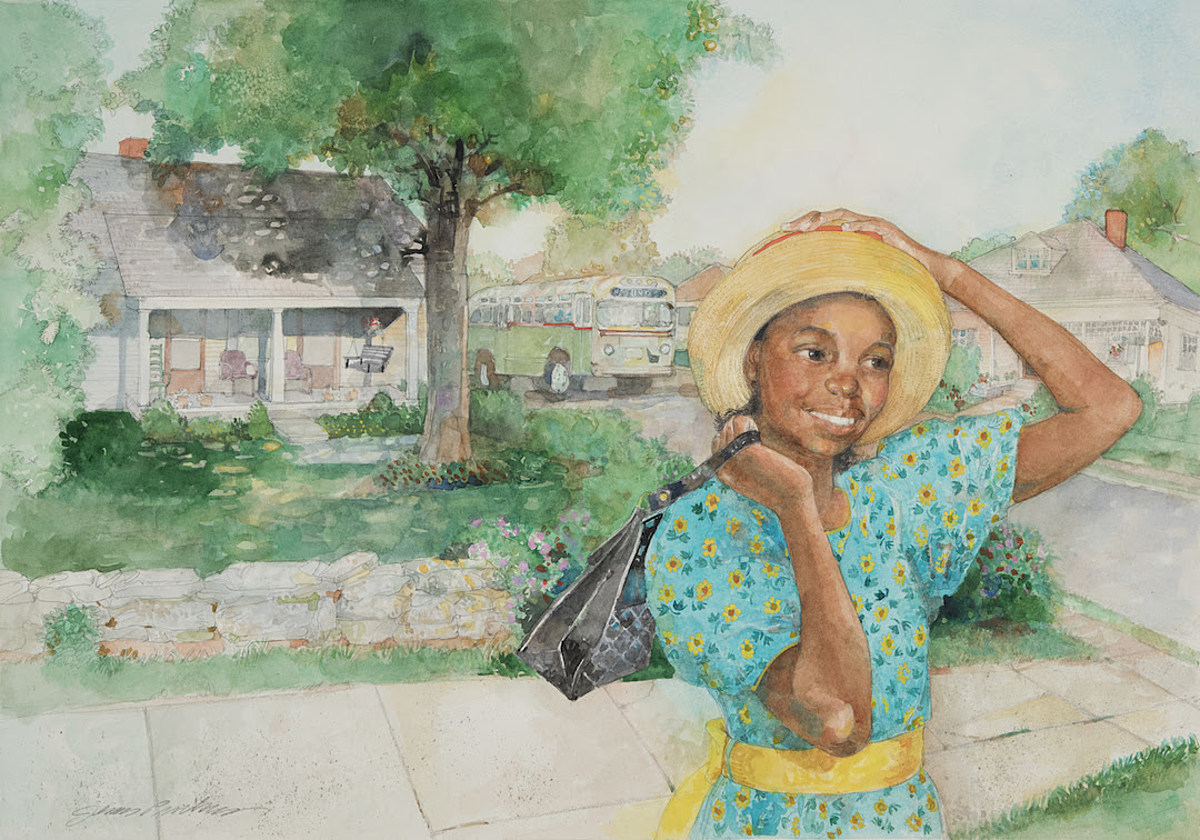 The Montclair Art Museum highlights never-before-seen works by award-winning illustrator Jerry Pinkney – and elevates that experience by offering visitors the opportunity to immerse themselves in the artist’s creative process.

“Tenacity & Resilience: The Art of Jerry Pinkney,” which runs through June 26, features artwork that expresses powerful messages from the civil rights movement.

His creative career has broken down barriers and left a lasting impression on the children’s book market, as he has illustrated over 100 books. He also created artwork for the White House and a portfolio of Black Heritage stamps for the US Postal Service.

MAM’s exhibition includes the work from start to finish of nine of these children’s books, covering the period from 1979 to 2020.

The watercolors in these books pop off the walls with vibrant color, rich texture, and a strong sense of identity and place. However, the exhibition does not stop there.

The show exposes Pinkney’s near-religious use of graphite, both as a standalone medium and with others.

The works also testify to his obsession with detail and his habit of immersing himself in his subject.

Pinkney was an artist who literally dressed to personify the characters he created. He also used his wife, children, and grandchildren to embody subjects for his work.

In a “CBS Sunday Morning” interview, the artist said that if he painted a tiger, wolf, or lion, he became the animal. “It becomes part of Jerry Pinkney. I find myself,” he said.

Citing the example of ‘Goin’ Someplace Special’, a book about segregation in the South, he said: ‘I couldn’t connect to that book until I had it in my head[ed] under a sign that leads you to the back of the bus.

Pinkney’s approach to research is remarkable, said Gail Stavitsky, chief curator at MAM. He could do hundreds of preparatory drawings, and he had quite a long process, she said.

The exhibition design aims to ensure that no one misses this point. The exhibition transports visitors beyond the museum-ready works into Pinkney’s studio, process and mind.

Sixteen sketches on legal paper are included. “That’s how it always starts,” Stavitsky said. He called it teasing ideas, she added.

Two large panels hang from the ceiling and hang at eye level. One features a completed scene at the Edmund Pettus Bridge from “A Place to Land: Martin Luther King Jr. and the Speech That Inspired a Nation.” The other is a sketch of the planning phase of this scene.

Both elements are “a central part of the show,” Stavitsky said, and they also complement the reading area, which Pinkney was thrilled to have.

Typically, if reading areas are included in an exhibit, they are done in a very simple way, she says. In this case, the reading space is enriched by highlighting an immersive and visual experience.

Visitors can grab a book and walk around the exhibit, seeing the transition of the work the book contains. This includes legal notebook sketches, near-final drawings, finished artwork, mock-up books, and finally, the finished hard copy.

The hanging panels are placed so that visitors can stand between them, moving from work in progress to finished work like an artist in his studio. Meanwhile, completed works inside the book serve as a backdrop on the surrounding walls.

Visitors also get a taste of the creative process through the lens of dyslexia, which Pinkney has battled her entire life. The works are displayed unmatted, allowing viewers to see his displays of artistic skill with sidenotes that include misspelled words.

Pinkney, who died in 2021, wanted to highlight his condition as part of his experience, Stavitsky said. “It’s amazing and wonderful that he became an illustrator of children’s books, that he read a lot, that he interpreted his readings and that he wrote himself,” she said.

The artist named the show. He felt that the common thread between the pieces and the spirit they embody is tenacity and resilience, Stavitsky said, adding that she believed overcoming obstacles and having the strength to persevere was the story of his life.

Preparation for the exhibit began in 2019. Putting it together during the pandemic presented challenges, such as the need for Stavitsky and Pinkney to collaborate remotely. Pinkney was finally able to visit MAM in June 2021 and was supposed to return in November, before the show opened, but died the month before.

Final work on the show, including the details of how the reading area would be incorporated, had to be completed without him, Stavitsky said.

Pinkney has often stated in interviews that her long-term goal is to be a strong role model.

“I was never a verbal person, but I could lead by example. And I always try to do that,” he said in the “CBS Sunday Morning” interview.