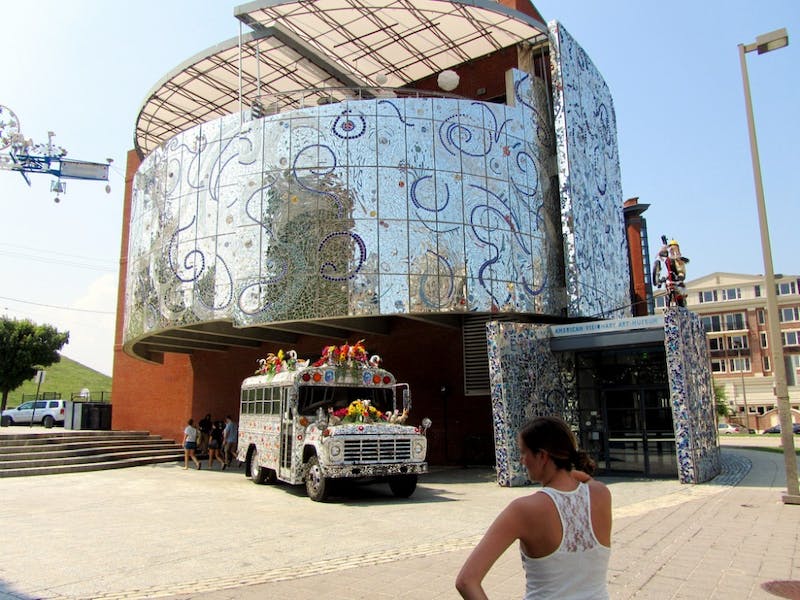 I’ve been on a little museum kick lately.

In true fashion for the past year, I’ve spent a lot of time exploring the city of Baltimore. This is partly due to the desire to learn as much as possible about where I have made my home over the past four years before I left.

However, I cannot claim that these are all historical museums and environmental walks. Sometimes you just have to look at weird stuff.

And Charm City has a lot of weird things to look at.

The American Visionary Art Museum (or AVAM for short) is undoubtedly a darling for most arts-oriented Hopkins students.

Even if your tastes are more traditional, the museum has plenty to offer.

One of the key things about the museum is that every artist featured has no formal training. They are people who love to create and, if I may be totally corny for a moment, that in itself is quite beautiful.

Above all, the building itself is an attraction. The exterior of the main gallery is decorated with magnificent stained glass depicting cosmological scenes.

There are also tons of sculptures to gaze at for free outside; a giant bird’s nest, a decorated school bus, a giant cuckoo clock featuring Baltimore legends John Waters and his muse, Divine.

If you really don’t want to spend any money, you can also check out the wildflower garden. There are, unsurprisingly, tons of wildflowers, plus more sculptures and a meditation chapela big wooden treehouse with tons of unauthorized graffiti.

The entrance cost to enter the museum is just under $10 for students, which damages your bank account about as much as Chipotle + guac.

Even if art isn’t your thing at all, only one of these places has “no E. coli” (we’re looking at you, Chipotle).

To sweeten the pot, transport is free; Simply take the purple route on the Charm City Circulator to the Lee Street stop, then hop on the Banner route to the aptly named American Visionary Art Museum stop. The whole journey should take around 20 minutes. Peasy easy.

There are three main parts to the indoor museum, and my favorite starting point is the visionary village at the Jim Rouse Visionary Center.

Visionary Village features some of the greatest exhibits. My favorites include the giant Ball Brawhich is exactly what it sounds like, and the museum’s huge collection of mechanical theater automata, aka dozens of little old-school robots.

The main Zanvyl A. Krieger building houses many of the museum’s permanent exhibits. With everything from traditional paintings to wire sculptures, there’s something for everyone.

And don’t forget to visit the basement and the flatulence pole. The whole exhibition revolves around flatulence: their categorization, their history and, of course, their different sounds. All in all, the display is great if you’re a 12-year-old boy or a middle-aged dad.

One of the best things about these exhibits is that, although they are permanent possessions of the museum, the art rotates, which means you’ll see something new each time, but you won’t no need to worry about your favorite pieces leaving forever.

There are, however, a few temporary exhibitions. The museum usually has a theme, featuring works by various artists. Past themes include hope, food, and storytelling.

This year’s exhibition, which opens on Saturday, October 7, is titled The Great Mystery and promises an exploration of human curiosity and imagination through physics, mediums and more.

The American Visionary Art Museum isn’t exactly the BMA, but I think that’s one of the reasons it’s so wonderful.

Any gallery in the world can hang a Monet or a bellows, but I think it takes a special kind of visionary (if you’ll excuse the pun) to look at balloons, mosquito nets or an old car hatchback and say “That could be art.”

It takes a special kind of quirky, quirky creativity and lots of encouragement from supportive friends, family and neighbors – two things Baltimore has in spades.

History of science museums, Europe and the United States

The best museum exhibitions in Europe for autumn 2017