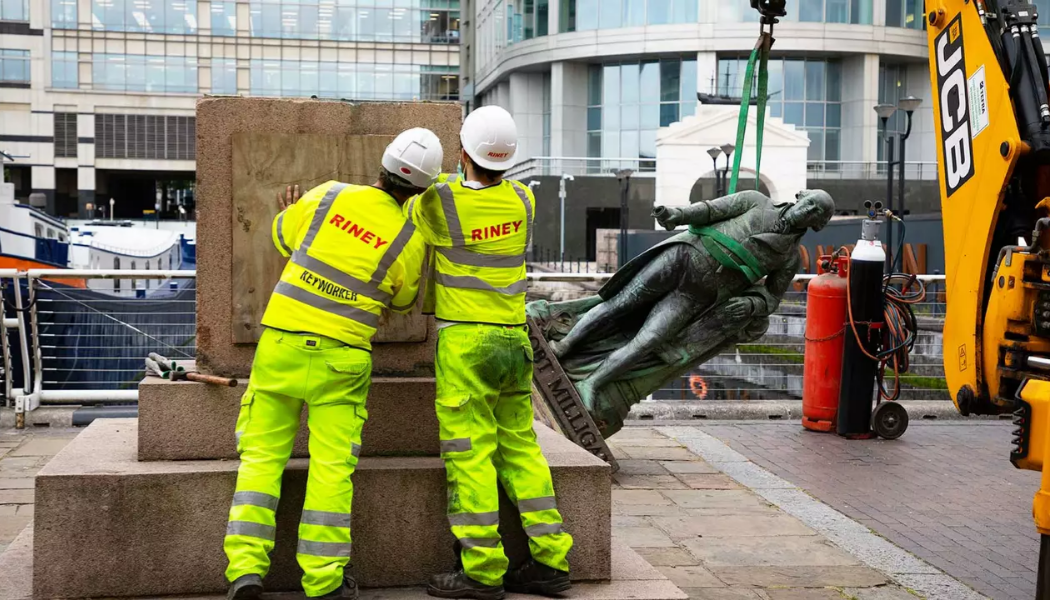 A bronze sculpture of merchant and slave trader Robert Milligan, removed from West India Quay in June 2020, is to be recontextualized as it joins the permanent collections of the Museum of London.

The statue was donated to the Museum of London by the Canal & River Trust and is part of the collection from this month.

Originally unveiled after Milligan’s death in 1813, the statue was first placed near the wharf offices until 1875, before being moved to the nearby main gate until 1943.

It was put into storage during the latter part of World War II and remained there for over fifty years before being rebuilt in February 1997 outside Warehouse No. 1.

As a slave trader and manager of his family’s Jamaican sugar plantations, Milligan’s wealth was a direct result of his slave trade. At the time of his death, he owned 2 sugar cane plantations and 526 slaves in Jamaica.

Milligan’s wealth was a direct result of his slave trade. At the time of his death, he owned 2 sugar cane plantations and 526 slaves in Jamaica.

In 2020, with the Black Lives Matter movement calling for an end to public monuments honoring slave owners, the museum said it had stepped up advocacy for the removal of the statue due to its historical links to violence and colonial exploitation.

The monument was detached from its plinth in June 202 after a petition calling for its removal was signed by over 4,000 people.

The local authority, Tower Hamlets, and landowners Canal & River Trust, have been tasked with removing the statue and a consortium has been formed to discuss the future of the statue. The consortium came to its acquisition and concluded that the statue should be housed in a museum where it can be fully contextualized.

The Museum of London Docklands, which deals with the history of the transatlantic slave trade, will retain the statue while it consults further with local communities on how best to present it.

A previous consultation on the future of the statue, its plinth and the region’s historical relationship with slavery, found that 76% of people were in favor of the statue being featured in an exhibition. 43% felt it should be stored in the museum and 15% said it should be kept out of public view at all times.

Supporters of the statue’s display have suggested it be presented with context on Milligan’s involvement in the creation of the docks, his ties to the slave trade and the recent Black Lives Matter movement.

“The West India Docks, defended by Milligan using the riches of the slave trade, are a visible reminder of how this history has shaped our city. It is right and important that we recognize this in the history of the statue. We will now take the time to consult with the local community to decide how best to move this forward as part of our collection,” a museum spokesperson said.

HOME OF THE ORIGINAL NEW YORK PIZZA PARTNERS WITH DAILYPAY