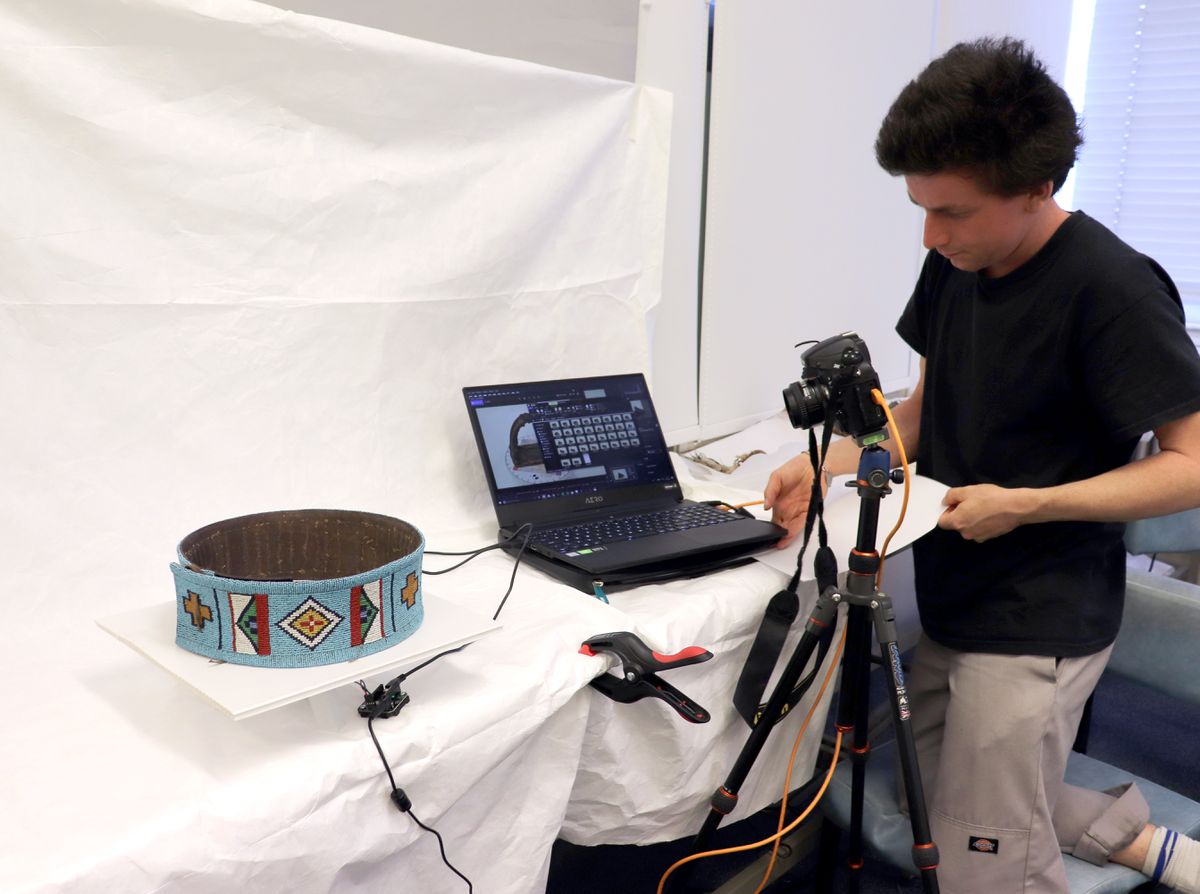 Blackfoot artifacts scattered throughout Britain’s museums now have a digital home where their stories can be shared with their descendants.

A collaboration between researchers at the University of Lethbridge, the Blackfoot Confederacy and three UK museums brings 19 non-sacred objects to virtual life with interactive 3D models.

An ocean away from its original home, a pair of moccasins purchased in 1929 from the Piikani Nation are in storage at the University of Cambridge Museum of Archeology and Anthropology. A bag of parfleche, or AsootsÃ­maan, from the Kainai nation that is over 100 years old is in storage in the British Museum. The Horniman Museum and Gardens in London has a bag made from the skin of a fetal bison made in the 1800s.

Many artifacts have been taken away by archaeologists, anthropologists and various other collectors.

In 2019, a group of researchers from the University of Lethbridge along with Blackfoot alumni and students traveled to Britain to view and photograph the objects. They were also helped by a British research team.

Now they have launched the Mootookakio’ssin website, which is part of the Blackfoot digital library. The library is dedicated to providing information on the Blackfoot nations and the peoples of the Blackfoot Confederacy through historical documents such as photos, field notes and recordings.

â€œThese articles are not just about individual use,â€ said Melissa Shouting, a member of the Kainai Nation and MSc student in health sciences who participated in the project.

â€œThey’re also about community engagement, the well-being of the community, and just helping someone develop that sense of identity about who they are, where they are from and the people they are connected with. It is therefore a question of collectivism in relation to this individualistic approach. “

Ms Shouting said the trip to Britain had prepared her for a hairdressing transfer, a process by which elders select someone who shows maturity and consideration for others. She had been approached a few times for transfers, but declined because she felt she was not ready.

“I had realized that London had prepared me for my transfer because of the objects I had seen,” Ms Shouting said.

“I had understood how certain things were made, the process of creating these objects and realized that these objects allowed me to know how to make them before I even started my transfer.”

The exhibits on the Mootookakio’ssin were captured using reflectance transform imaging (RTI) and photogrammetry, two techniques commonly used in archeology.

RTI is used by taking multiple photos of an object with the light source coming from a different angle each time. This captures the shape and color of an object and also reveals subtle surface details. It is often used in imagery of cultural heritage.

Photogrammetry involves taking the information gathered by many different photos to create meshes or in this case, a 3D digital model via software tools.

The team visited the MAA where they photographed 10 items, including a swan’s foot bag, quill bracelet and beaded awl case believed to have belonged to Little Plume, an Amskapipiikani chief who was believed to have been born in the middle of the XIXth century. The punch holster is also believed to belong to his wife, Cuts Different.

The team then photographed 17 images for digital modeling at the British Museum, including knife cases, beaded sashes and a story dress.

Their last stop for the trip was at the Horniman Museum and Gardens. Here, they imagined two headdresses, a buffalo fetus sack and an inisskimm, or buffalo stone, believed to be a lucky charm.

Christine Clark, assistant professor of new media at the University of Lethbridge, said there was a lack of information on how these objects were acquired by museums. In comparison, there is usually an abundance of documentation on who has donated items.

“It was a real process of discovery, of detective work and of research with each piece to try to get a better idea of â€‹â€‹where it might have come from or who it might have belonged to,” said Professor Clark.

“I think the other really interesting thing about objects in terms of their importance is how each of these objects represents material culture, knowledge and connection to the earth.”

The website was launched amid a growing push from Indigenous communities in Alberta and beyond to retrieve their historical artifacts.

MAA Senior Curator Anita Herle hosted the research team in 2019 and had previously hosted representatives from the four Blackfoot nations as part of a project focused on the Blackfoot collections in UK museums. She said the Blackfoots had not yet applied for repatriation to the MAA.

â€œHowever, the collaborative work we did on the previous project ultimately led to the repatriation of the Crowfoot shirt from the Exeter Museum,â€ Dr Herle said.

Elder Piikani Jerry Potts, who was part of the trip to London, worked with several other museums and was involved in the repatriation of several Blackfoot ceremonial items.

â€œWe are fighting to keep our language and our culture alive,â€ said Mr. Potts. â€œEven in our own communities we have so many people who are in their second and third generation of Christian education and they don’t understand what a lot of this material means for the welfare of the masses. It’s not about religion or anything. It’s about learning who you are and where your employees are from.

The Siksika First Nation, located east of Calgary, had been pushing for the return of the badges that once belonged to Blackfoot chief Chief Crowfoot, who is buried on the grounds of Blackfoot Crossing Historical Park, and has supported by Alberta Premier Jason Kenney. In April 2020, Exeter City Council voted to return the badges.

We have a weekly newsletter from Western Canada written by our BC and Alberta office managers, providing a comprehensive set of news you need to know about the region and its place in the issues Canada is facing. confronted. register today.

From the White House to America's premier museum of modern art - Washington, DC as an artistic destination