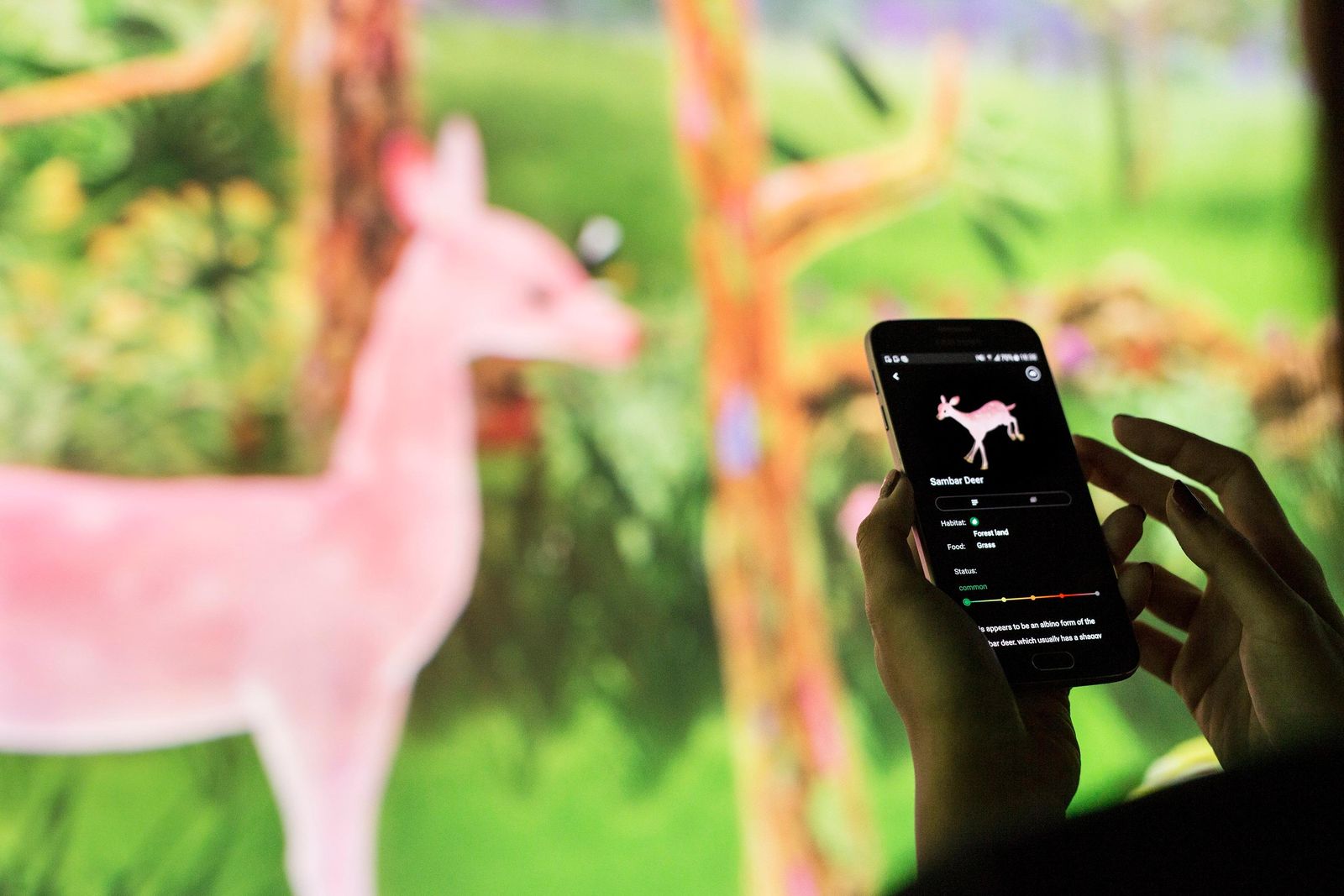 Imagine being surrounded by a world of ghosts, things that aren’t there unless you look carefully enough and in the right way. With augmented reality technology, this is possible and museums are using it to their advantage. With augmented reality, museums overlay their virtual world on what is actually in front of you, bringing exhibits and artifacts to life in new ways.

These five spots are great examples of how augmented reality enhances the museum experience.

If you liked Pokémon Go, head to the National Museum of Singapore for a similar experience called Story of the Forest. The exhibit is housed in the museum’s glass rotunda, with a giant mural of 69 drawings from the William Farquhar collection of natural history drawings consisting of flora and fauna. Visitors use an app, combined with the device function photo from their phone, to hunt and capture various plants and animals in the drawings. The app, like Pokémon Go, tells you what’s nearby and adds it to a photo collection once you capture it. Then another part of the app opens the photo and provides more information about the captured plant or animal. Users learn things like an animal’s habitat and diet, the rarity of the plant or animal found, and general information about the species.

The Smithsonian’s oldest museum room is officially upgraded with new technology in the Skin & Bones exhibit. The Bone Hall (an anatomy exhibit that opened in 1881 with the first Smithsonian museum) still has many of the original skeletons, but patrons can now use an app to overlay skin and movement onto the bones. In one part of the exhibit, a vampire bat takes flight from its mount. In another, a sea cow grows bigger before your eyes. And in yet another place, an anhinga demonstrates how it catches fish. Thirteen total upgrades can be found throughout the exhibit – and if you can’t make it to the museum in person, you can always download the app and images and try it out from home.

At Heroes and Legends, augmented reality brings holograms of astronaut royalty to life. The entire exhibit is dedicated to the men and women at the heart of America’s space program when it was just beginning. Interactive rooms located throughout the building allow early astronauts and NASA legends to tell their stories: why they worked on the program, what the space experience was like and what it meant to them. But one of the crown jewels is a hologram of Gene Cernan, an astronaut who tackled a terrifying spacewalk outside the Gemini 9 capsule. Cernan’s spacewalk, the second in human history, nearly ended in disaster when a malfunction in his spacesuit caused him to overheat, fogging up his visor and leaving him virtually blind as he spun uncontrollably. Accompanied by voice-overs from Cernan and his commanding officer Tom Stafford, visitors can look through a screen to see a hologram of Cernan superimposed on the actual historic space capsule, as he struggles to fit inside during what he calls it “the spacewalk from hell”. ”

Over 3,000 years ago, an ancient civilization known as Shu lived in Chengdu, China. The Shu used to gather at Jinsha, where the Jinsha Site Museum now stands, to pray and offer sacrifices to their gods. In 2001, Chinese archaeologists unearthed the site and found over 5,000 gold, jade and ivory artifacts. Visitors to Jinsha can now use an app to explore these relics, see what they look like in 3D, and learn more about their use. Two particularly prominent examples on display are a gold mask that appears to float and spin in front of the visitor’s face, and a gold leaf totem with images of the sun and immortal birds.

Outside of the walled museum scene, a new app called England’s Historic Cities uses augmented reality to let tourists interact with heritage sites across the country. There are 12 in total spread across England, from Durham Cathedral and Hadrian’s Wall in the north to the Roman Baths and Salisbury Cathedral in the south. At each location, famous historical figures act as your virtual guides and information is superimposed on the walls and on the artifacts. For example, at the Roman amphitheater in Chester, centurion Marcus Aurelius Nepos tells the story of England’s bloody fighting there. And in Statford-upon-Avon, William Shakespeare guides visitors through a behind-the-scenes story of his life in his family home.

8 Chicago Museum Exhibits to Check Out in May - Chicago Tribune

The Aldrich Museum of Contemporary Art exhibits until September 4