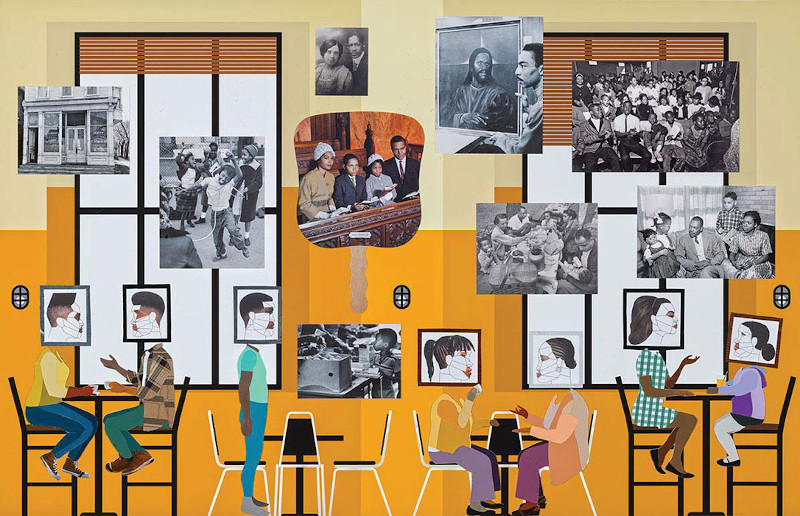 A new commissioned mural titled â€œIn Place: Derrick Adams, Our Time Togetherâ€ was unveiled on October 29, 2021 at the Milwaukee Art Museum. The mural was made especially for the east end of the museum overlooking Lake Michigan.

The mural is a 93-foot-wide, 15-foot-tall work that reframes historical narratives of black people and examines the role of the media in shaping identity.

Artist born in Baltimore and based in Brooklyn, New York, Derrick Adams works in performance, video, sound, and 2D and 3D fields. Her practice focuses on the fragmentation and manipulation of structure and surface, exploring self-image and forward projection.

The artist celebrates the daily rituals of black life and leisure, what normal black life looks like and how to celebrate it.

Dennis McDowell, 19, exhibited a rifle to members of the NAACP Youth Council during a meeting at Freedom House 2026 N 5th St. Photo published in 1968 Milwaukee Journal (Photo by Karen Stokes)

â€œWhen he came to visit us in 2019, we showed him these archives of Milwaukee Journal and Milwaukee Sentinel photographs between 1951 and 1989, which were sold to William Gregory,â€ said Lisa Sutcliffe, Herzfeld Curator of the photography and media arts at Milwaukee Art. Museum.

Adams was inspired by “The Negro Motorist Green Book” by Victor Hugo Green, a travel guide for African Americans from 1936 to 1966.

The Green Book was a guide to services and accommodations that were relatively user-friendly for African American travelers, rather than dealing with the dangers and inconveniences along the way, from denial of food and accommodation to arrest and to physical damage.

â€œThe Green Paper connected people in a way that made them feel as American as everyone else at a time when everyone pushed travel and recreation and black Americans still struggled with the idea of â€‹â€‹having access and security because so many outside forces were in danger. life. It still exists today, â€Adams said in an interview with Sutcliffe.

â€œOver the past five or six years, after organizing the Sanctuary exhibit using an artistic design focused on the Green Book, I have become fascinated with all the listings and going to different cities and being in contact with different historians, â€Adams said.

â€œHistorically, meetings at barber shops or coffee shops have been meetings to hold marches and demonstrations and discuss neighborhood development,â€ Adams said. “It’s not always about talking and laughing, it’s also a place for planning and strategizing.”

A Milwaukee Journal photo taken on April 8, 1968 after the death of Martin Luther King Jr. Adams revealed that this photo is a beacon of hope and equality (Photo by Karen Stokes)

â€œIt was a pleasure to get to know this city and learn part of its history while developing this project,â€ he said. “There is so much more to say about this rich black American history in Milwaukee and I hope this mural can answer some of the questions.”

“On Site: Derrick Adams, Our Time Together” will remain on view at the museum until 2024.

The Milwaukee Art Museum‘s hours of operation are Thursdays 10 a.m. to 8 p.m. and Friday-Sunday 10 a.m. to 5 p.m. Reserve your entrance tickets and find information on parking, security protocols and more at mam.org/visit.