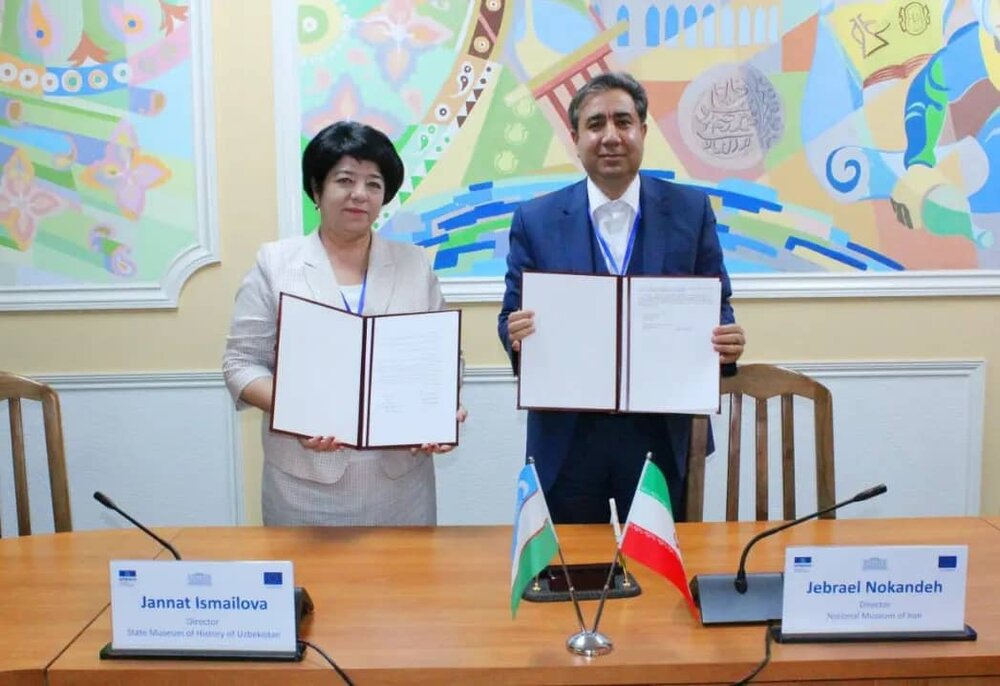 TEHRAN – The National Museum of Iran has entered into an agreement with the National History Museum of Uzbekistan to expand relations, organize exhibition loans and share expertise.

On Friday, the director of the National Museum of Iran, Jebrael Nokandeh, and his counterpart Jannat Ismailova, who chairs the National History Museum of Uzbekistan, signed a memorandum of understanding in Tashkent.

The agreement is expected to help develop scientific and cultural ties such as research, cultural and educational projects between the two major museums, a National Museum official told the Tehran Times on Sunday.

“Cooperation in the field of culture, history, art and museum activities; hold joint symposia; organize joint exhibitions; the exchange of specialists and joint publications are among other pillars of the argument,” the official explained.

This memorandum of understanding is valid for five years. It should be noted that the National History Museum of Uzbekistan is under the auspices of the Uzbek Academy of Sciences, the official added.

The agreement was signed on the sidelines of the fourth working meeting of the joint exhibition on common heritage along the Silk Roads. The meeting was organized by UNESCO in Tashkent on Thursday and Friday. Besides the National Museum of Iran, the National Museums of Tajikistan, Kyrgyzstan and Kazakhstan have also signed a Memorandum of Understanding with the National History Museum of Uzbekistan.

On the same day, Iran’s Ambassador to Uzbekistan, Hamid Nayyerabadi, said the two countries have immense potential to expand ties with museums due to deep cultural and historical similarities. “The deep cultural and historical commonalities between Iran and Uzbekistan have provided rich ground for interactions between museums of both countries in holding cultural events and exhibitions,” Nayyerabadi said.

Nayyerabadi made the remarks on Friday during a meeting with Nokandeh at the embassy in Tashkent. Referring to the interest and desire of the government and people of the Republic of Uzbekistan to have more relations with Iran, Nayyerabadi said the two nations enjoy deep cultural and historical commonalities.

In addition, the Iranian envoy announced that he is ready to help with the translation of the National Museum of Iran guidebook into Uzbek. This important reference of Iranian culture, art and civilization has been translated into various languages ​​such as English, Italian, Japanese, French and German in addition to Persian.

Its main building, designed by French architect André Godard and completed in 1928, is one of Tehran’s most attractive modern buildings, blending Sasanian principles such as the grand iwan-style entrance with art deco brickwork.

Inside, among Shush’s finds are a stone capital of a winged lion, delightful animal-shaped pitchers and vessels, and colorful glazed bricks decorated with mythical double-winged creatures. A copy of the diorite stele detailing the Babylonian Code of Hammurabi, found at Susa in 1901, is also on display – the original being in Paris.

The Persepolis exhibits include a magnificent human-headed capital, a cuneiform inscription proclaiming the power and divine affinity of Xerxes, and a striking frieze of glazed tiles from the central hall of the Apadana Palace. Also on display are a famous trilingual inscription from the time of Darius I, a bull’s head capital and carved staircase, a statue of a seated dog that appears to have been carved just a few weeks ago, and four tablets of foundation inscribed in cuneiform.

One of the most surprising exhibits is Zanjan’s Salt Man. It is estimated that he was a miner who died in the 3rd or 4th century CE, but whose white-bearded head, leg in a leather boot, and tools were preserved by the salt in which he was buried.