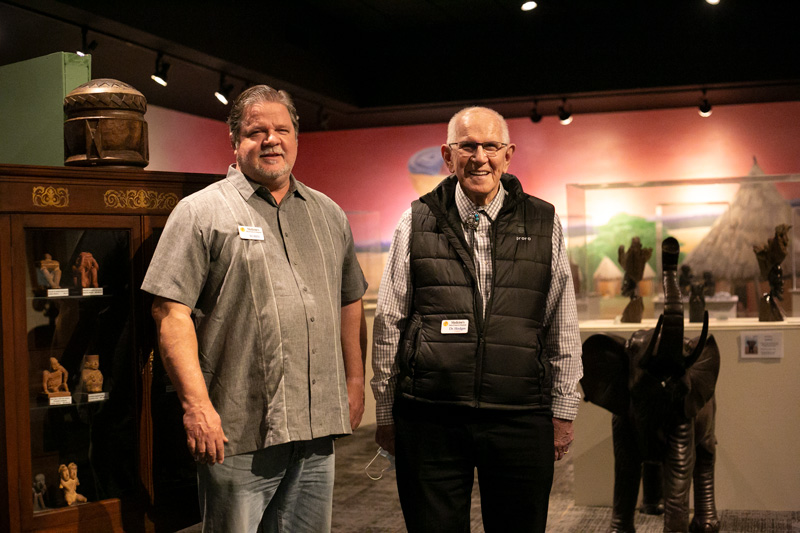 Longtime physician and medical missionary Dr. Bruce Hodges has traveled the world collecting thousands of interesting artifacts, many of which illuminate the history of medicine.

He only needed a place to store everything and share his collection with others.

Thus, the Medicine’s Hall of Fame & Museum quietly opened during the COVID-19 pandemic, inside the former location of the Johnson County Museum in Shawnee.

Hodges is founder and curator. Almost all of the museum’s artifacts come from his personal collection.

â€œIt’s a gift of my life’s work,â€ Hodges said. â€œI have been collecting these artifacts for 55 years and thought they should be on display.

Located at 6305 Lackman Road, the building was closed for years after the Johnson County Museum vacated space and moved to the Arts & Heritage Center along Metcalf Avenue in Overland Park.

Hodges said he had searched for years throughout the Kansas City metro area to find a space that needed minimal reconstruction for his idea of â€‹â€‹a museum of medicine.

More importantly, he wanted it to be local, since he practices medicine in northern Johnson County.

Hodges and a board of directors have formed a nonprofit organization to support the museum. Forrest Preston, the billionaire founder of the senior care facilities Life Care Centers of America, is the museum’s main benefactor and helped Hodges purchase the building.

“The realization of a desire for life”

Since opening late last year, the museum has received a handful of donated artifacts. But ultimately, the vast majority of the collection is that of Hodges.

He has collected over 4,600 artifacts during his career and travels. He says about 80% of his collection is now on display. The oldest artifacts in the museum date back to prehistoric times, including Inca artefacts from 1100 BC to 1500 BC.

â€œIt’s the fulfillment of a lifelong desire to share the artifacts with the world,â€ he said.

The museum officially opened on November 1, 2020, just in time to draw attention to a full-scale diorama of a depiction of the miracles of Jesus Christ.

Hand carved by 22 artists from Kenya’s Akamba tribe, the exhibit fills an entire room in the museum and continues down the hall. Hodges said it was a hit for the Christmas season.

There is also a room showcasing ancient Egyptian and Chinese medicinal practices and another depicting dozens of artifacts from African tribes.

Another room displays Native American artifacts, including a baby cradle that rests right in front of a wall-to-wall display of medical paraphernalia from past American wars.

Curator’s son Robin Hodges, who is the museum’s director of operations and lives in Shawnee, recommends visitors to tour the room paying homage to the many stories of African tribes.

â€œIn Africa they make a lot of their history in sculpture, while in Egypt they painted walls and things,â€ said Robin Hodges. â€œSo we have a lot of very unique sculptures that tell the story of medicine, whether it’s a mother giving birth or a medicine man in formal costume, things like that. It is quite impressive.

Another room is devoted to a reconstruction of an American pharmacy from the beginning of the 20th century.

There’s a buggy pulled by a doctor, a bizarre display from the examination room of a deceased Minnesota dentist – the dentist was killed in his own dental chair – and quite a tribute to the polio epidemic that has swept across the United States in the 20th century.

A life and a career of memories

Hodges, who is 88 years old and still practices medicine to support the museum, vividly remembers what it was like to experience the polio epidemic.

For him, getting vaccinated against COVID-19 is not just obvious; it is also the right thing to do to save lives.

Connecting the exhibition halls is a great hall of fame honoring the many physicians and medical professionals who have contributed to the field of medicine.

Hodges began practicing medicine in 1964. Today he is medical director at a life care facility in 75th and Switzerland. Prior to that, he was a physician at the Overland Park Regional Medical Center.

He served many years as a medical missionary with his wife, Cathy. They have made several tours on the African continent. The couple live in Lenexa. Cathy Hodges also has a medical background, overseeing a team of pulmonologists at the Overland Park Regional Medical Center.

Museum Exhibits & Virtual Events This Month In Houston - May 2021