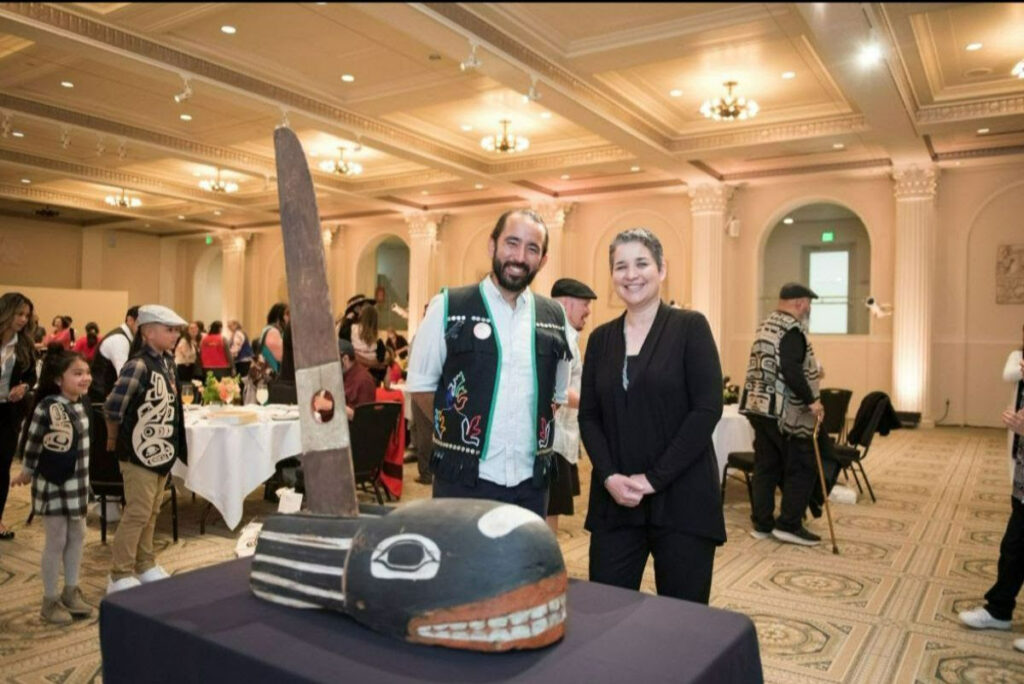 On Wednesday, June 8, nine significant objects formerly in the collections of the Portland Art Museum arrived in Juneau, Alaska, on their way back to the Tlingit community whose craftsmen had fashioned them.

After years of negotiations following a claim originally filed in 2002 and approved by the museum in 2019, the items, including the Killerwhale hat pictured above, have been repatriated to the tribes – and specifically the clan Naanya.aayí in and around Wrangell, where they were originally. Covid complications have delayed the transfer so far, according to a statement from the museum on Friday.

“We are very grateful for all the work that has been done to return the atóow of the Naanya.aayí clan,” said Luella Knapp, member of the Naanya.aayí clan and the Wrangell Cooperative Association, during a handover ceremony. private at the museum on May 27. “As the custodian of these clan items, it’s an honor. Receiving them back, one by one, revives the spirit of the person who carried them. We are so happy they have returned to Naanya.aayí from Wrangell.

Repatriation is a global issue in the museum world, and one that is growing. This made headlines in cases involving works of art stolen or bought out of desperation from Jewish owners by Nazis or profit-making dealers, during or shortly before World War II.

This has been a huge problem in the antiquities trade, with pieces smuggled or stolen or bought on the black market from Egypt, Italy, Greece and elsewhere, then landing in Western museums. The Elgin Marbles, or Parthenon, created in Athens in the 5th century BC. AD and transported to London in the early 19th century, where they are kept in the British Museum, remains the most famous case.

And it’s a significant issue in indigenous cultures around the world, from the Americas to Africa to Australia, New Zealand, Southeast Asia, Pacific Islands, Arctic cultures and beyond. In such cases, the question of cultural heritage – of who “owns” the objects – goes beyond the deeds of sale and concerns questions of historical inequalities and cultural independence.

The returned pieces were part of a collection of more than 800 Native objects acquired between 1921 and 1944 by Axel Rasmussen, who had served as superintendent of schools in Wrangell and later Skagway, Alaska. The Portland Art Museum purchased the collection in 1948, three years after Rasmussen’s death, and it remains a central part of the museum’s extensive Native American collection.

How at least some of these pieces arrived in the Rasmussen collection remains controversial. The late Yaxhoos sculptor Arnie Dalton (1944-2001), who pressed for the objects’ return, “shared that his mother Betty Carlstrom (1925-1994) was remembered as a child when many of these objects were taken away” , a statement by the Central Council of the Tlingit and Haida Indian Tribes of Alaska. “‘She was six years old when her great-grandmother died and she remembered the Wrangell police coming into the house and just seizing the trunks with the items,’ he shared during a an interview in 1986.”

Kathleen Ash-Milby, curator of Native American art at the Portland Museum and a member of the Navajo Nation, said repatriation has been one of her top priorities since joining the museum in 2019. “I understand that these objects should not have been collected in the first place,” she said in the statement from the Tlingit and Haida Indian Tribes. “These objects are part of cultural heritage and that makes sense. be sold.

“I am grateful that times have changed and that the museum is committed to moving in the right direction with this first repatriation to the Tlingit by the Portland Art Museum,” she added in the museum’s statement. “By returning these ancestral objects to their communities, we can begin to mend a complicated history between Indigenous peoples and museums. It was an honor to help with the final stages of this repatriation and to see these ancestors finally swim home.

“This is a historic occasion, too long to pass,” said Brian Ferriso, director of the Portland museum since 2006, in the museum’s statement. “While museums continue to try to do the right thing and be on the right side of history in fulfilling their mission, mistakes are sometimes made and it is essential that the wrongs of the past be rectified. repaired. This is what we are trying to do with the restitution of these works.

“Stewardship isn’t just about storage and exhibits, it’s also about our relationships with communities. We are honored to take this important step with our partners in the Tlingit communities, and look forward to working together in future discussions.