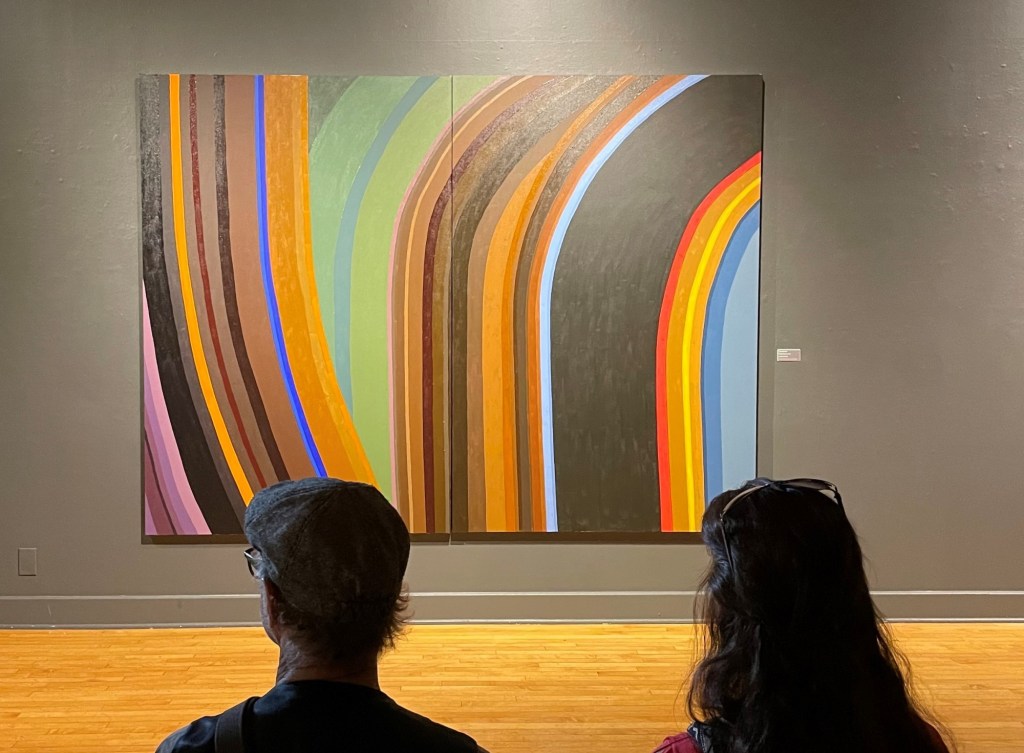 While in Riverside on Sunday afternoon, your culturally-minded columnist dropped by the Riverside Art Museum for a reception featuring three new exhibits.

“Rhythmic Inquisitions” brings together 19 abstract paintings by black painter June Edmonds dating back 25 years. There are brightly colored “energy wheel” paintings, inspired by Edmonds’ meditation, and two large “map” paintings that might appear to be nothing more than wavy lines of varying colors. There is a little more than that.

“The title of this one is ‘Only a Gardener,'” Edmonds told me as we talked in the gallery. The heirs of Edward Coleman, a black pioneer from La Jolla who arrived in 1919, had requested that his house be designated a historic site, she explained.

The request was granted in 2016, although a lawyer argued that Coleman did not deserve recognition or remembrance because he was a “gardener”.

“Of course he was so much more than that,” Edmonds said, citing Coleman’s roles as a mover, landlord and more.

The painting is actually an aerial view of the black neighborhood in which Coleman lived, with the vertical lines of color representing the streets. “Only a Gardener” works as a summary, but the backstory certainly adds punch.

On the opposite wall is a similarly inspired painting, “Ahead, Behind, Beneath”. “I see them as conversations. They all have conversations with each other,” guest curator Lisa Henry told me.

Edmonds, who lives in Los Angeles, is the 2022 recipient of a Guggenheim Fellowship in Fine Arts. “We were lucky to have this exhibit,” enthused Drew Oberjuerge, the museum’s executive director. “Abstract Inquisitions” is on view until November 27.

Meanwhile, upstairs at the Riverside Art Museum are two small but worthy exhibits.

For “Endemic Treasures” (through Jan. 18), Fred Brashear hauled a toppled Joshua tree away from a construction site (with permission), turned the trunk into paper (it looks like rice paper), and pasted slightly faded photographic images of intact Joshua trees. and landscapes on the leaves.

The idea was to comment on the threats to emblematic trees due to urbanization and climate change. Slightly pale and fragile images make their point.

Of course, it was the most humorous exhibit that struck a chord, or at least a funny bone, with me.

For “Western Waters” (through December 31), photographer Sant Khalsa visited more than 200 water shops in the southwest. By photographing their facades, Khalsa also captured the creative names of companies trying to differentiate themselves while selling a product that comes out of any faucet.

A store named Pure Water had a banner promising “Coming Soon”. We can only dream.

Great to see familiar faces at the local History Book Fair on Sunday in Riverside, some of whom introduced me to new faces. It will take time to meet the 325,000 inhabitants of the city, but I am making steady progress.

Numerically speaking, I sold nine books (not bad) and collected at least four column ideas (even better). And a few of you have been warm in your praise for what I’m trying to do here, a welcome boost.

This second annual event, sponsored by the Riverside Historical Society and aimed at those interested in the history of the Inland Empire, seemed like a modest success. A lecture on Camp Anza, the Riverside military installation during World War II, drew 70 people and filled a room. People picked up books, met writers and exchanged contacts.

True, contacts were not always immediately successful due to older eyes. A retired elected official handed me a business card—someone else’s. A woman gave me what she thought was her card. It was a product label with a UPC symbol.

The book fair wasn’t just for people from Riverside. A couple from Fontana was present. This is San Bernardino County. So did a couple representing the Pomona Historical Society. This is LA County.

Is Pomona the IE, though? Let’s not go back on that.

Have you heard of the young coyote on the grounds of a school in the Jurupa Valley who got spooked by everyone and ran into the restroom to hide in a stall? I guess most of us could identify. Who hasn’t rushed into a bathroom at some point when emotionally overwhelmed? Coyote, we feel you.

'More than a museum': Memories of Fort Worth's Kimbell Museum of Art as it turns 50