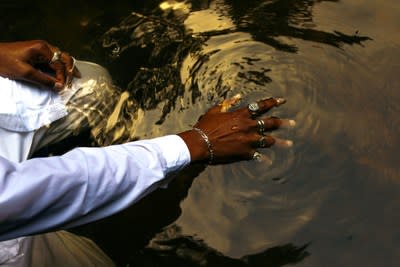 LeXander Bryant: Forget me not

NASHVILLE, Tennessee., December 16, 2021 / PRNewswire / – The Frist Art Museum presents Nashvillebased artist that of LeXander Bryant first solo exhibition at the museum Forget me not. Showcasing multimedia works including sculpture, photographs, murals and a new video, the exhibition addresses themes of perseverance in adversity, family structures and ties, economic inequalities, community activism, etc. Organized by the Frist Art Museum, Forget me not will be on view in Frist’s Gordon Contemporary Artists Project Gallery in From January 28 to May 1, 2022.

In his community-oriented practice, Bryant (b.1989) uses different mediums to inspire, challenge, and uplift his audience. A prolific and sought-after photographer and filmmaker, Bryant has collaborated with local creators and establishments ranging from rapper to Mike floss, visual artists MarÃ­a Madeleine Campos Pons and pastejoe, and Slim & Husky’s Pizza Beeria on various projects. Many Nashvillians may also be familiar with Bryant’s wheat paste murals (or â€œposters,â€ as he calls them) in public spaces; his fresco Opportunity cost was also featured in the 2019 Frist Art Museum exhibition North Nashville murals now.

“Whether in his hometown of Jackson, Alabama; quarters of Nashville, where he has lived since 2016; or elsewhere, Bryant’s focus is on people and places that are often overlooked, â€says senior curator of the Frist Art Museum Katie delmez. In this exhibit, nearly four dozen snapshots from everyday life make up what Bryant calls a “memory wall” documenting figures and stories that collectively refuse to be forgotten. Bryant sees parts of his own past in these images, acknowledging the influence of elders in his community, for example, or the success his cousin’s Oldsmobile Cutlass symbolized for him as it grew. and was maturing. “

Viewed together, the images portray a cultural vibrancy – young black boys on bicycles are pictured outside a North Nashville grocery store; a man cuts his son’s hair outside their apartment complex. Other photographs subtly counter negative stereotypes. In one poignant image, a young girl is resting on her father’s lap on a subway bench with her arm around his neck.

The centerpiece of the exhibition is a suspended slab of cracked concrete from which bloom blue forget-me-nots. The installation echoes the sentiment of the late rapper Tupac Shakur’s poem “The rose that grew out of concrete” and honors survival and growth despite seemingly impossible circumstances. Instead of roses, forget-me-nots are used to emphasize the importance of remembering one’s past. The sculpture’s concrete base represents Bryant’s father’s career in construction and the time they spent working together. Using material from his father’s trade, Bryant integrates his family into the work, making a literal and symbolic foundation. â€œBryant affirms the value of his father’s work by incorporating concrete into his art object,â€ explains Delmez.

The sculpture is raised to remind viewers, especially children, that just because we can’t see something doesn’t mean it’s not there. The work also reflects lofty goals – one of the artist’s recurring messages to black youth is that there are a multitude of rewarding careers beyond music and sports. â€œBryant’s creative path has been winding, in part because he had limited knowledge of career opportunities while growing up in a rural setting. Alabama“says Delmez. He spent six years in the Air Force Reserve after high school before studying industrial technology with a concentration in graphic communication at Alabama A&M University, an HBCU in Huntsville. “These experiences greatly shaped the emerging artist and remain anchored in her memory.”

Unlike the collage-like assemblage of documentary street photographs in the Memory Wall, is a selection of larger-scale studio works by Bryant. “More singular in their emphasis, these compositions zoom in on a part of an individual’s body, signaling the universality of the human form and the need for physical and spiritual nourishment”, explains Delmez. In Don’t blame the young, a photograph taken in collaboration with that of Mike Floss 2015 album of the same name, a boy holds a spoon filled with milk and shells rather than the cereal that should have come from the Lucky Charms box on the table. Bryant highlights the unfortunate position many young people face as they attempt to escape the lies they are fed by the media, advertising and other sources and continue to lead healthy, creative and healthy lives. intentional. “

An experimental video created for the exhibition includes clips from previous projects as well as intimate interviews with his family and friends in his hometown of Southern Alabama. Together, the works on display provide an opportunity to consider one’s current position by critically reflecting on the past and envisioning its legacy.

About the Frist Art Museum
Accredited by the American Alliance of Museums, the Frist Art Museum is a non-profit 501 (c) (3) art exhibition center dedicated to presenting and creating high-quality exhibitions with programs educational and related community outreach activities. Located at 919 Broadway in downtown Nashville, Tenn., The Frist Art Museum features the best visual art from local, regional, national and international sources in exhibits that inspire people through art to look at their world of ‘a new way. Accessibility information can be found at FristArtMuseum.org/accessibility. Entrance to the gallery is free for guests 18 and under and for members, and $ 15 for adults. For current hours and additional information, visit FristArtMuseum.org or call 615.244.3340.