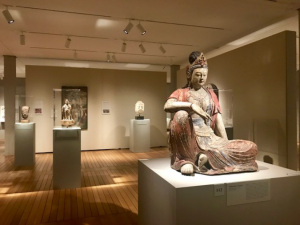 The Kimbell Art Museum in Fort Worth, Texas, USA is hosting an extensive exhibition featuring hundreds of objects and works from the private collection of Sam and Myrna Myers. The exhibition, titled Lands of Asia: the Sam and Myrna Myers collectionhighlights the couples’ passion for Asian art and presents an impressive collection of objects from Central Asia, China, Japan, Korea, Mongolia, Tibet and Vietnam, ranging from the Neolithic to the present day.

The 450 objects, exhibited in four different galleries, entitled Costumes and customs, An ocean of porcelain, A thousand years of Buddhism, and Jade Magic, include Buddhist art, ceramics, ivory, jade and other precious stones, textiles and traditional costumes. The objects were selected from the collection of Sam Myers and his late wife, Myrna, an American couple who collected more than 5,000 works of art while living and traveling in Europe and Asia for five decades. Their journey as collectors began with four terracotta Greek heads, which are featured as the opening pieces of the exhibition.

“In terms of the number of objects in the exhibition, this is the largest exhibition ever presented by the Kimbell,” said Jennifer Price, curator of Asian art at the Kimbell Art Museum. (Star-telegram.com)

Eric Lee, director of the Kimbell Art Museum, described the exhibition as “a rich, intricate and magical tapestry â€“ a panoramic history of Asian cultures from ancient to modern times”. (Dallas Observer)

The first gallery costumes and customs, consists of a rich collection of elaborate dresses and kimonos with impressive colors and patterns. It houses an Uzbek chief’s first robe, one of Myers’ favorite items in the exhibit. “Much like today, what you wear kind of reflects who you are, your status, your wealth and your tastes,” Price commented. “That has always been the case in Asia.” (Dallas Observer)

â€œLike textiles, porcelain was also a symbol of trade, commerce and diplomacy,â€ Price noted. (Dallas Observer) And the second gallery, An ocean of porcelain, showcases the wide variety of blue and white porcelain produced in China from the 14th to the 17th century.

The third gallery, thousand years of Buddhism, presents objects from Central Asia, China, Korea and Japan. It traces the journey of Buddhism from northern India to China, Tibet, Korea and Japan. The exhibits here show how all those different localities and cultures that adopted Buddhism, created their own Buddhist art, ranging from textiles, statues, thank youand mandalas, combining religious motifs with local aesthetic and artisanal materials. Walking through the exhibition, Myers noted how the gallery seemed to imbue a sense of serenity and spirituality, showcasing her collection in a new light: “I’m thrilled she’s here,” Myers said, ” We look at these pieces differently because we have lived with a lot of these things When you see a piece like the “Bodhisattva” [a painted wood carving] actually presented with proper light so you can really see it, it’s truly breathtaking. (Star-telegram.com)

The fourth gallery, titled the jade magic, features a selection of Chinese jade from what Price has described as “the most comprehensive collection of Chinese jade in private hands”. (Star-telegram.com) Describing the exhibits, Price mentions: â€œFor the Chinese, jade is the most precious material, more precious than gold or silver. Many people think jade is just green, but in fact it is not. (Dallas Observer) And indeed, the exhibition houses objects carved in blue, green, brown and yellow jade. Jade is attributed with protective properties and even the smallest pieces are said to be used to make ritual tools and objects, royal regalia, ornaments, carvings and funerary garments.

The exhibit, which will run through August 19, combines the stories of Asian art, religion and culture with the story of the Myers and their growth as collectors. This is the largest exhibition ever held at the Kimbell Art Museum, due to the large number of exhibits.

Kimbell’s Asian Lands exhibit features textiles, Ming porcelain, Buddhist art and jade (Dallas Observer)
Massive exhibition at Kimbell captures the couple’s zeal for collecting and the breadth of Asian art (Star-telegram.com)
From the Lands of Asia: The Sam and Myrna Myers Collection (Artsy.net)
Asian lands come to the Kimbell (boss)
One of the world’s most important collections of Asian art makes its US debut at the Kimbell Art Museum (Kimbell Art Museum)