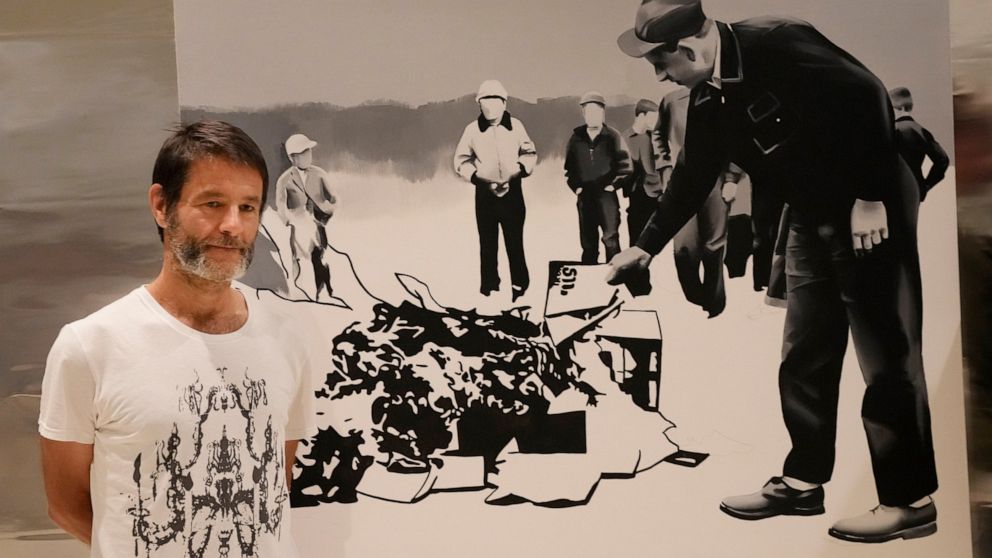 WARSAW, Poland — The Museum of Jewish History in Warsaw opened an exhibition on Thursday featuring works by a renowned Polish artist that confront the lingering and melancholic presence of the Holocaust in Poland, where Nazi German forces carried out their destruction. European Jews and other atrocities.

“Wilhem Sasnal: Such a Landscape” opened Thursday at the POLIN Museum of the History of Polish Jews. The dozens of paintings and drawings on display confront the Holocaust in the physical and mental landscape of the nation and the difficulty of dealing with an unstable past.

Sasnal, who is not Jewish, has grappled with this story for two decades. The 48-year-old described a generational need to confront the past, also because some parts of Polish society refuse to acknowledge that while Poland fell victim to Nazi Germany, some Poles also participated in the plunder and murder of the country’s Jews.

For decades after World War II, such discussions were taboo, with themes of Polish sacrifice and honor dominating historical memory. But with the new openness that came with the fall of communism in 1989, scholars and artists began to study and speak openly about anti-Semitism and some Poles’ involvement in German crimes. Every new book or movie strikes a chord.

“The history of World War II was obscured until 1989,” Sasnal said.

It was then ‘extremely shocking’, he said, when scholars began to expose wartime wrongdoings by Poles, including the 1941 killing of hundreds of Jews by Poles in the city by Jedwabne.

“At first I felt angry and ashamed,” he told The Associated Press.

“And it’s still so hard to see that people don’t want to acknowledge it. People totally refuse, and this is the dominant attitude of the Polish government.”

Sasnal is one of Poland’s most prominent living artists. His works are part of the collections of the Museum of Modern Art and the Solomon R. Guggenheim Museum in New York, the Tate Modern in London and the Center Pompidou in Paris, among others.

Sasnal also acknowledged that Poland is often judged unfairly – that sometimes those not in Poland lose sight of the bigger picture.

Still, Sasnal thinks Poles should recognize the bad with the good.

“If we don’t accept such a complex past, we will be judged and misjudged,” he said.

The exhibition includes two decades of works that touch on the Holocaust in some way – works that Sasnal made while also dealing with other subjects.

The older ones were inspired by cartoonist Art Spiegelman’s Holocaust comics in his “Maus” books. The most recent were created this year especially for the exhibition.

There are paintings of former death camps, but they are always contextualized, with Sasnal’s bicycle or his wife looking out from inside a car at the gates of Auschwitz – as depicting the only death camps would be too banal and brutal, he said.

The Auschwitz paintings were made after he and his wife walked past the memorial site on their way home from a New Year’s Eve party on January 1. Millions of people visit the site from all over the world. But for many Poles – including Sasnal, who lives in nearby Krakow – the presence of genocide memorials is part of the landscape of everyday life.

A painting of an imaginary map of Poland bordering Israel recalls the long coexistence of Jews with Poles in Poland, a Jewish homeland for centuries.

A portrait of Hitler has been covered in black paint and crossed out with a wooden bar, an evil too extreme to depict figuratively.

The paintings, which are inspired by images first created by French painter Edgar Degas, an anti-Semite, are a reminder of the pervasive anti-Semitism across Europe that created fertile ground for the Holocaust. We evoke a bather on the model of a work by Degas superimposed with a swastika.

Paintings of gypsies or stereotypical images of Africans in the popular imagination how other groups, along with Jews, have long been seen as the “other” in society.

Ahead of the opening, curator Adam Szymczyk braced for the possibility that this exhibit, too, could anger nationalists and the right.

But now that a right-wing party rules the country – and is a co-partner in the museum, which is a public-private partnership – he said he expected the reaction to be more muted.

He said he and Sasnal were driven by the need to express remorse.

The exhibition lasts until January 10.