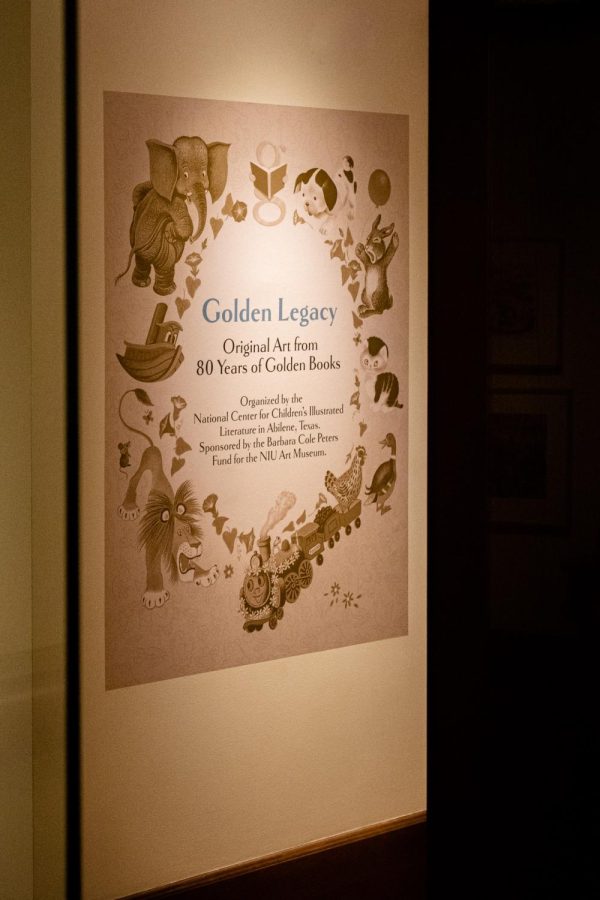 Before the official start of the closing reception, the guests talked quietly among themselves and entered the gallery space. Participants engaged in conversations with family and friends in the museum.

“Golden Books is so nostalgic. You know, it brings back so many great memories with our kids,” said Donee Spizzirri, administrative assistant at the College of Visual and Performing Arts.

When the reception officially began, museum staff offered light refreshments to the guests present. Food and drink were not allowed in the exhibit spaces, so guests had chairs to sit in the hallway.

After eating the food and drinks, guests were able to browse the galleries and view the rare books on display in the gallery hallway. The UNI Library provided some books from its special collections.

The second exhibition contained the work and illustrations of James Ransome. Ransome captures the African American experiences that show people going about their daily lives through her work.

The show had several seats in the gallery so attendees could pick up and read selected books. There were QR codes and videos scattered throughout the two galleries so people could find out more about the books and pictures on display.

“It’s sad when something closes or ends, but that’s the nature of things,” Ransome said. “It was really fun to come here and hang out with people who saw this show.”

Ransome said he hopes his work inspires people. He went to say he liked to share his work, otherwise the art would stay in his basement.

Peter Olson, deputy director of the Art Museum, said the next “Stories from My Childhood” exhibition will open Nov. 29 and close Feb. 17. The gallery will be closed for the university’s winter break on December 12. January 18 to 9.

During the assembly of the exhibition “Stories from my childhood”, the gallery will be closed. This gives museum staff time to tear down the previous exhibit space and set up the new one, Olson said.

“At the next exhibition, there are about 39 to 40 artists in the exhibition. This last show was more historic and only featured one artist,” Olson said.

“Stories From My Childhood” will be a bit different from past exhibits at the museum. A call for artists from all over the country was launched during the summer. A committee made the final decision on which pieces were to be displayed in the exhibition.

Olson said he thought the idea of ​​doing a judged competition was fun and that they would have two judges to hand out prizes, such as best of the show, due to additional funding.

To learn more about the NIU Art Museum, visit their Upcoming exhibitions webpage.

In a pinch? Here are the four loans you can get the fastest

'I'm not a Habersham hick' opening at the Piedmont Art Museum