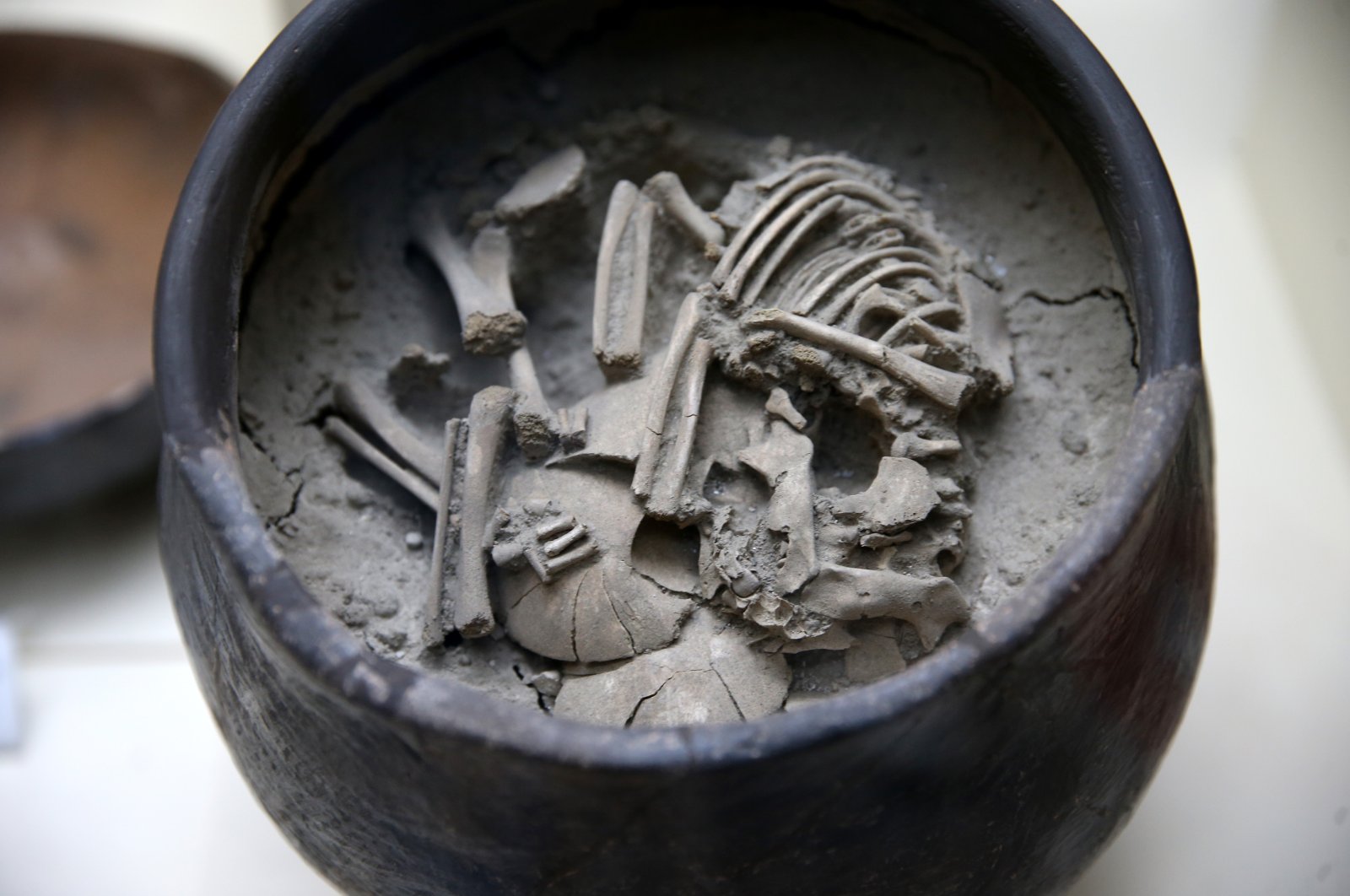 A 5,000-year-old cubic tomb containing the skeleton of a baby found in 1980 during excavations at Arslantepe mound, a UNESCO World Cultural Heritage site, is now on display at the Malatya Museum, in eastern Turkey.

Many artifacts have been discovered in the mound of Arslantepe in Malatya, eastern Turkey, which has a history of around 7,000 years, during excavations carried out by La Sapienza University of Rome since 1961.

The 5,000-year-old pithos burial discovered in 1980 is now on display in the Malatya Museum.

Museum director Samet Erol told Anadolu Agency (AA) that there are around 20,000 artifacts in the museum, which has been in operation since 1970.

Explaining that the artifacts discovered during the salvage excavations of Arslantepe Mound and Karakaya Dam are exhibited in the museum, Erol said that the museum contains significant artifacts in terms of Malatya, Turkish and world history.

Erol said Malatya is a city that stands out for its history and mounds, and the inclusion of Arslantepe on UNESCO’s World Cultural Heritage List last year had a global impact.

Noting that they unveiled the pithos burial for the first time before the International Museum Day marked on May 18, “In this sense, we renew from time to time the showcases of our museum to highlight the mound of Arslantepe and present new works to our visitors,” he added.

Expressing that there have been many funeral traditions throughout human history: “One of them is cremation while the other is burial without cremation. Here is a funeral form of pithos. There is a burial of a baby who has not yet reached maturity. In some pithos burials, the deceased is accompanied by his belongings. No objects have been found in the pithos tomb we are currently exhibiting What stands out is the fact that the pithos tomb skeleton has not deteriorated in terms of shape,” he said.

“Since then, the pithos has been in our warehouse. We present it to our visitors for the first time. It is a tomb dating from 4,500 to 5,000 years ago in the Bronze Age. In Anatolia, the Ubaid culture is an effective form of burial. The culture comes from Mesopotamia. This burial tradition can be seen in many places in Turkey, as we see in Arslantepe and Değirmentepe,” he said.

“Cubic tombs were mostly buried right under the living areas of houses at that time. Because they didn’t want to be too far from the dead, which can be seen as a ritual,” he added. .

Visitors said they were impressed with the museum.

Keep up to date with what is happening in Turkey, in its region and in the world.